1st Tiebreaker  –  Head To Head Record  –  Pretty self explanatory, if you won the season series against a team (PERHAPS BY SSS, SEASON SERIES SWEEP) then you obviously own the tiebreaker over a team. So since everyone plays everyone twice that refers to going 2-0 or 1-0-1 against an opponent.

4th Tiebreaker  –  Total Season Stats As Matchup –  Should mostly make sense, you take the two tied teams and look at who would win if you look at the entire season as one H2H matchup. That will teach you pussies that are afraid to stream to 18 starters in the extended weeks, is what that will do. 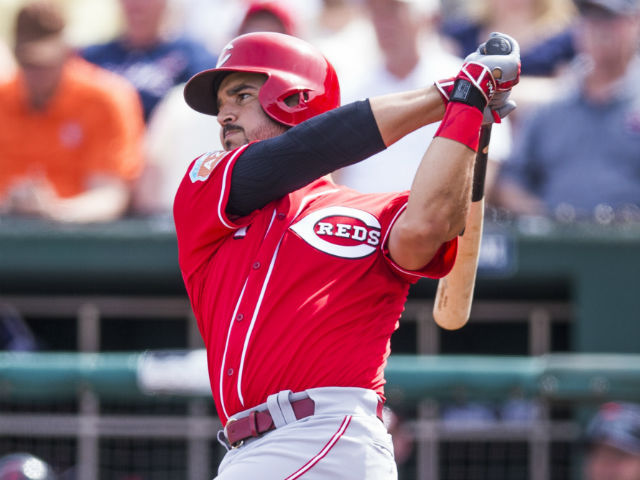 MVP:  Eugenio Suarez  –  Somehow the Reds have scored the 4th most runs in the NL and so also Eugenio Suarez is second in baseball in RBIs. The Banana Slugs are 9th in the Backyard in RBIs and baseball is a majestic and mysterious game, is what it is.  9/21, 7 Rs, 1 2B, 3 HRs, 7 RBIs, .571 OBP

LVP:  Marcus Stroman  –  I’ve always thought Marcus Stroman has mostly sucked so I am just going to give this to him, still not really aiming for PEAK ANALYSIS or PEAK NON-TYPOS here. So yea fuck you Marcus Stroman I’ve known about you for years.  4.2 IP, 6 ER, 2 Ks, 11.57 ERA

Bad Dudes Hitter Of Note:  Jed Lowrie likely putting the Dudes in a downright conundrum over whether or not they should try and ship him outta town, same as any other team he ever plays for (5/17, 4 Rs, 1 2B, 2 HRs, 6 RBIs, .455 OBP).

Bad Dudes Pitcher Of Note:  And shout out to Elieser Hernandez for perhaps putting together what will be the worst start of the year in the Backyard [not researched particularly thoroughly] (2.1 IP, 10 ER, 38.57 ERA).

LVP:  Anthony Rizzo  –  I suppose I shall decide to give the OGTFC an LVP (rather than giving Eric Hosmer LVP which would have been groundbreaking Week Review type shit) because I do in fact blame Heroy for all the ties inflicted upon this league. But yea Hosmer sucked but Rizzo also wasn’t all that good, and for a greater number of ABs than Ahmed Rosario (who always sucks).  3/19, 3 RBIs, .200 OBP

LVP:  Delino DeShields  –  TAKE YOUR PICK REALLY, the Bears O came out a little flat in Week 14 (a la a Rex Grossman offense). And unfortunately Delino came aboard and gave me absolutely nothing and I had to set him free which breaks my heart every time but is also a part of life.  1/14, 1 R, .133 OBP     ***LVP OF THE WEEK***

What can I sayyyyy really, ran into a real GWS BUZZSAW and they have now won 8 in a row ladies and gents. In Week 14 they nearly set the season’s runs record which would have been HARDLY necessary, the Bears O S’d a D and only mustered 5 HRs. So yea CLEAN SWEEP of the hitting cats for the Warriors (7-0) and then they outsaved the Bears by 1 save, so they conceded the pitching cats 1-5-1 and it didn’t even goddamned matter. Neither team pitched great but at least the Bears racked up 107 Ks. AT LEAST THAT.

In Week 15 the Garden State Warriors will go for magic number nineeee on their win streak, taking on the OceanGate Trout Fishing Club on OG turf. The OGTFC are still just a game or so outta the playoffs, I dunno I haven’t checked but they ain’t dead yet I am pretty sure. Speaking of not dead, the Bell Road Bears will host the not-dead Lacey Township BackdoorSliderz and I I think a W would justtttttt about clinch a #BackyardBracket spot for the Bears and make the remaining 3 weeks a couple team race for the 6 seed. I think that’s just about how that would work. Let’s just see what happens.