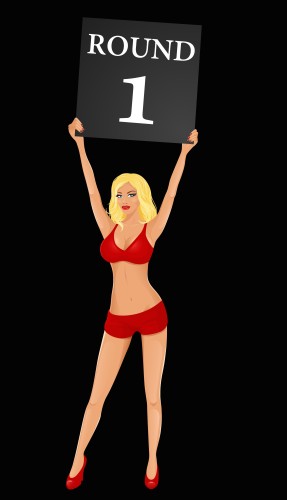 Isotopes Pitcher Of Note:  Same goes for you Jose Berrios, you were a failure because your owner thought SO LITTLE of you that he benched you in the playoffs and so you went 7 shutout with 7 Ks and it counted for nothing (NO STATS).

ASSORTED MUSINGS/ANALYSIS:  You would have thought this one had the potential to get extra spicy with the two participants sharing a room in Denver at the time of battle but MEH. We caught a Charlie Blackmon HR live but it was on the same night Machado hit 3 with 7 RBIs so there was a certain air of that Blackmon HR not much mattering by the end of that particular evening (The Bad Dudes would win HRs 21-12 and RBIs 67-43). This one was all about the Bad Dudes showing the fuck up on offense, as the victors sported an unsightly 5.004 ERA (Isotopes would win ERA with a 4.286) but overcame such issues by racking up a NEAR SWEEP of the offensive cats:  6-0-1, with a 7-7 SBs tie representing the only cat the ‘Topes tied in. And really that one plus a narrow 3 to 2 loss in 3Bs representing the only offensive categories that were even CLOSE here. So yes the Isotopes maybe had a slightly down week on the offensive side but also the River City Bad Dudes came to play and that is why they are moving along AS PER USUAL and the ‘Topes are going home in the first round AS PER USUAL. In Round 2 the #4 seed Bad Dudes will take on the top-seeded MooniniteZ.

Next Week aka This Week:  #4 Bad Dudes @ #1 MooniniteZ, #5 Isotopes @ Another Offseason Filled With Angry Fans Clamoring For A Playoff Win In Their Lifetime 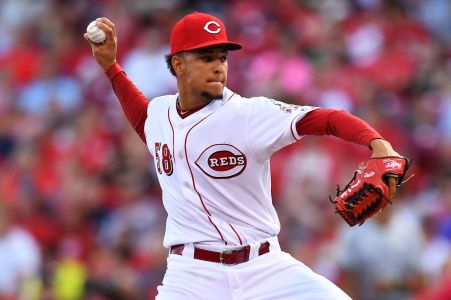 MVP:  Luis Castillo  –  Castillo brought the Ks as usual and also kept the ER to a minimum and these two things sorta epitomized the X-Rayz first round performance. SO GIVE THIS MAN AN MVP.  10 IP, 2 ER, 15 Ks, 1 QS, 1.80 ERA

X-Rayz Hitter Of Note:  Rhys Hoskins did such a fucking number on opposing pitchers last week that I had to strongly consider giving him this matchups MVP just to make HIM the MVP of Round One, here’s your runner up for that (7/21, 7 Rs, 4 HRs, 6 RBIs, .481 OBP).

BackdoorSliderz Hitter Of Note:  Continuing with our theme of only discussing the losers on the losers I present to you Bradley Zimmer, the least useful batter for the BDSliderz in R1 (3/14, 1 R, .167 OBP).

BackdoorSliderz Pitcher Of Note:  And the award for least useful pitcher I guess has to go to Trevor Rosenthal, who simply tacked on 2 ER to Lacey’s ERA and contributed POSITIVELY NOTHING ELSE (0 IP, 2 ER, INFINITE ERA).

ASSORTED MUSINGS/ANALYSIS:  And so His Dochness has learned that Odom brought him into this world AND HE CAN TAKE HIM OUT OF IT. Or something. Odom just knocked Doch out of the playoffs is what I am saying here. And how did you ask? Or did nobody ask but I am going to explain it quickly anyways? PITCHING THAT IS HOW. The BackdoorSliderz actually battled their way to a solid 4-1-2 on the hitting cats, IMPRESSIVELY managing to win 3Bs (4-2) and tie SBs at 10 (they did lose RBIs to the bad RBI team but yanno what can you do). Where the tide turned in this one is on the other side of the coin, because Lacey did THIS (77 Ks, 3 QS, 2 Ws, 4 Saves, 3 Holds, 4.725 ERA) and Point Loma did THIS (86 Ks, 5 QS, 4 Ws, 8 Saves, 6 Holds, 3.035 ERA) and THAT is how you flip a matchup with strong pitching and a strong bullpen. The 6-0-1 the X-Rayz put together on the pitching side would really turn out to be all they needed here, and with that they earn their franchise’s first playoff W and their second straight appearance in the #FieldOfFour. For Lacey Township they can hold their head high after an impressive mid-season takeover that resulted in a playoff berth. For the #3 seeded X-Rayz, I just fucking said it. They will take on the #2 seeded Barnegat Banana Slugs in R2.

Next Week aka This Week:   #3 X-Rayz @. #2 Banana Slugs, #6 BackdoorSliderz @ An Offseason Where They Can Hold Their Heads High During Unlike That Other New Guy That Essentially Never Won After April Essentially

Now that we have looked at how we arrived at this #FieldOfFour, let’s take a look at the matchups that will determine which two teams will advance to THE BACKYARD CHAMPIONSHIP SERIES and find themselves one win away from Backyard Immortality….. 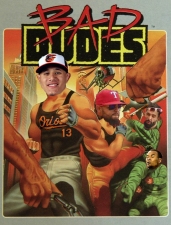 The Bellcrest Park MooniniteZ aka me finally appear on the scene, hoping to avoid last season’s fate of a First Round Bye followed immediately by a Second Round Exit. It will be a clash with old nemesis Lobman and his ridiculously-named Bad Dudes that determine their fate, and on paper at least these two teams have similar styles:  adjacent rankings in 3Bs, HRs, RBIs, Ks, and Saves and also tied at the top in Wins. SO SIMILAR STYLES. A large part of this battle may be determined by which team’s sluggers show up, as the Bad Dudes are without two of their top players but are being boosted by improving play out of the Machados and Abreus of the world and of their team. Meanwhile the MooniniteZ have Arenando and a bunch of guys and they are worried all those guys wasted too many dongs on the bye week (21 bye week dongs). TIME SHALL TELL.

These two teams battled twice in the regular season, as teams are wont to do, and the MooniniteZ took both matchups (a 7-6-1 dub in Week 1 and a 7-4-3 dub in Week 9)split their season series, with the BackdoorSliderz winning in Week 6 (7-3-4) and the Point Loma X-Rayz taking their Week 15 matchup (7-6-1). The winner here moves on to the BCS as the National League’s representative because the playoffs worked out all cute like that this season. This would also be the THIRD STRAIGHT BCS appearance (and a chance at a third title in four appearances) for the Bad Dudes franchise; for the MooniniteZ it would be their first appearance overall, and ownership’s first taste of the BCS SINCE THEIR DYNASTY DAYZ (three titles in three straight appearances).

WHAT TO WATCH FOR:  STREAMER SUCCESS RATES.  Injuries are a part of the fantasy game and these two teams are A BIT BANGED UP. For the Bad Dudes that means a couple stud hitters are down plus Danny Salazar, for the MooniniteZ that means no James Paxton and no Lance McCullers and no second start from Alex Wood (also no Desi but fuck him really). This means you can expect to see a HEFTY amount of streamers from the top seed and also a pretty solid amount from the Bad Dudes, and how those streamers perform will go a long way towards determining the victor here. Here is where I point out that this is a late preview and so I’ve already gotten through 5 starts with a pathetic one fucking win and an even more pathetic 20 fucking Ks out of the starters. HERE IS WHERE I MENTION THAT.

The Point Loma X-Rayz strut into Round 2 FEELIN GOOD, and waiting for them there is the Barnegat Banana Slugs POSSIBLY FEELIN’ BETTER as the they enjoy their franchises first R1 Bye. Interestingly enough for storyboard purposes these two teams are also kinda similar in certain mannerisms, namely both being BAD in HRs (Slugs 9th X-Rayz 10th) and RBIs (Slugs 8th X-Rayz 10th) and both being SIMILAR in Ks, QS, Ws, Saves, hell even ERA is kinda close. Also these are two of the 3 teams to win 5 straight weeks in 2017, the other being the top-seeded MooniniteZ over there on the other side of the bracket. So what to discuss what tooooo….discusssss. Essentially it will be important for one of the two teams to be better than the other team in all of these categories where they might feel like a coin flip if you are into reading too much into season-long stats (rosters change a whole fuck of a lot and all), while also maintaining their usual pace in the categories they should be comfortably favored in (i.e. SBs and 3Bs for the X-Rayz, again if you believe in season-long numbers and completely ignore the power of single week small sample sizes and so on and so forth). All of that will kinda add up to whom has the best chance at winning here.

In the regular season the Banana Slugs had the season sweep here, besting the X-Rayz both in Week 4 (9-3-2) and Week 13 (6-5-3). Whomever bests whomever else THIS TIME will be your American League representation in this year’s BCS. The appearance in said title game would be the second for the Banana Slugs franchise (0-1) and the first for the X-Rayz franchise, again not counting ownership’s previous dynasty of league lore (3-0).

WHAT TO WATCH FOR:  POWER NUMBERS YET AGAIN/DOUBLEHEADER MASTERY. With this one featuring two HR-averse teams that cat will be weighted a weeeee bit more heavily, ONE OF EM HAS TO WIN IT UNLESS THEY TIE IT. And whichever team wins that one might well be on the right track to victory overall. ALSO again since this is a terribly late review I can also work in “doubleheader mastery” as something to watch:  the X-Rayz racked up 1 2B, 3 HRs, 11 RBIs out of a fucking Twins-White Sox doubleheader using entirely streamed bats. So advantage X-Rayz there.

IT ALL COMES DOWN TO THE FIELD OF FOUR AND FOLLOWING THAT WE WILL BE AT A FIELD OF TWO AND WHOEVER WINS THAT ONE WILL BE OUR 2017 CHAMPION AND AT LEAST IT ISN’T THE TROUT FISHING CLUB AMIRITE? NOW IF YOU WILL EXCUSE ME I HAVE A MATCHUP TO TURN AROUND OR POSSIBLY NOT TURN AROUND… HOPING TO SEE SOME MORE PEP IN THE TEAM’S STEP GOING FORWARD THOUGH GOTTA BE HONEST. BYBR2 TUNE IN……………….